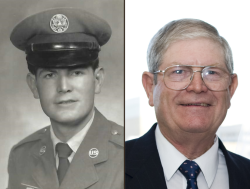 David Virgil Harris, Jr. “Dave,” passed away peacefully on the evening of Wednesday, Jan. 12, 2022, in Las Cruces, NM where resided for 33 years.

Dave was born in Abilene, to David Virgil Harris, Sr., and Virginia Evadine Evans on June 15, 1944. Dave lived with his mother and stepfather, Milburn Arthur Nutt Sr., in Breckenridge. He had a beautiful singing voice and was proud to have sung in the Boys’ Choir. Dave played competitive tennis and was an all-star baseball player during his teenage years. He was married to Shirley Ann Bentley from 1968 to 1981. Dave and Shirley had two daughters, Gina Elizabeth and Cynthia Lynn.

In 1963, Dave entered the United States Air Force where he served for 20 years. Among his recognitions for his service were the Vietnam Service Medal with one Silver Star and three Bronze Stars, six-time award of the Air Force Good Conduct Medal, and Small Arm Expert Marksmanship Ribbon. He was a Technical Training Instructor in Metals Processing during his service career. Dave was proud to have served his country.

Following his time in service, Dave graduated with two degrees from New Mexico State University, Welding and Computer-Aided Drafting. In 1993, he married Rita Mary (Catlin) Franklin in Carson City, NV. He worked for Lockheed-Martin and the Physical Science Laboratory at White Sands Missile Range, until his second retirement. He was an accomplished golfer and enjoyed motorcycle riding. Dave and Rita made many RV trips around the country.

David V. Harris Jr. will be laid to rest at the National Memorial Cemetery of Arizona. In lieu of flowers, please consider a donation to the Wounded Warrior Project charities by visiting www.woundedwarriorproject.org. The family thanks Mesilla Valley Hospice for its kind and gentle attention and service.