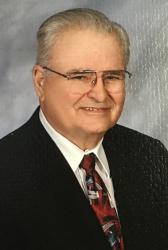 Donald Brant Crenshaw Jr., 85, died Thursday, May 11, 2017 in Abilene. Funeral service with Revs. Greg Porterfield and Charles Kuhn officiating were held Monday, May 15, at 3 p.m. at the First Christian Church. Interment followed in the Breckenridge Cemetery.
Donald Brant Crenshaw Jr. was born Jan. 26, 1932 in Breckenridge, to Donald Brant Crenshaw Sr. and Elizabeth Ewing Crenshaw. He graduated from Breckenridge High School in 1950 and Trinity University in 1961 with a degree in architecture.
Don married Martha Hughes on July 18, 1972 in Breckenridge. He had worked as the superintendent of the Breckenridge Gas Plant, and then later owned Gebco Integrating Company. Mr. Crenshaw was a veteran of the U.S. Army and a member of the First Christian Church.
He is survived by his wife, Martha Crenshaw of Breckenridge; daughters, Betsy Crenshaw of New York and Sally Lloyd and husband, Rob of Stephenville; sons, Donnie Crenshaw of San Antonio and Cory Crenshaw and wife, Shelle of Breckenridge; brother-in-law, Lane Bickham of New Braunfels; sister-in-law, Olien Crenshaw of Breckenridge; and grandchildren, Rachel Young, Aiden and Rebekah Lloyd, Carly and Devin Crenshaw, and Eli Crenshaw-Smith.
He was preceded in death by his parents; his first wife, Maerita Crenshaw; sister, Nancy Bickham; and brother, Dick Crenshaw.
Memorials may be made to the First Christian Church, or the donor’s favorite charity. Online condolences may be left at www.meltonkitchens.com.