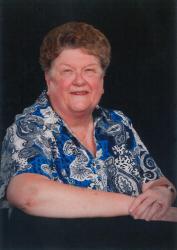 Elaine Evers, age 76 of Breckenridge, passed away February 28, 2021. A celebration of her life will be held at 11 a.m. Saturday, June 5 at First United Methodist Church with Pastor David Fergeson officiating. Services have been entrusted to Morehart Mortuary.

Tommie Elaine Baker was born January 30, 1945 in Cisco to parents, Reverend LeRoy Baker and Mary Fleming Baker. Reverend Baker was a minister in Putnam at the time. Being the daughter of a Methodist minister who moved to a different church every few years, Elaine developed her knack for making new friends early. She was a caring, supportive, and loving wife, mother and friend. She was a member of the First United Methodist Church in Breckenridge.

She married Charles Evers in Amarillo in 1986. They lived in Cedar Hill and Maturin, Venezuela before moving to Breckenridge in 2008. She was preceded in death by her parents; her brother, Floyd Bake,r of Haskell; and several aunts and uncles. She is survived by her husband, Charles; one daughter, Dana Breshears and wife Morgan, of Aubrey; sister, Marian Nix, of Shallowater; uncle, Dwayne Fleming and wife Winnie, of Plainview; and sister-in-law, Penny Baker, of Haskell. She also has four step-daughters, grandchildren, and great grandchildren, as well as many cousins and brothers/sisters-in-law and aunts.

Memorials may be made to the Alzheimer’s Foundation or to your favorite local charity and may be left at Morehart Mortuary. Condolences may be made online at www.morehartmortuary.net.