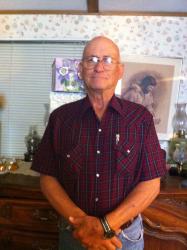 Harold Joe Shackelford was born October 16, 1944 in Bridgeport, to parents Olen David “Bud” Shackelford and Ruby Evelyn Trammel Shackelford. Harold graduated from Portales High School and went on to graduate from a New Mexico college. He joined the National Guard and later was honorably discharged. On January 5, 1995, Harold married Linda Lowe in Breckenridge. He worked as a Correctional Officer at the Walker Sayle Unit in Breckenridge for several years until his retirement. He was an active member at First Baptist Church and of the Roughnecks Bible Class. He enjoyed building things, writing books and watching old time movies. Harold loved spending time with his family and doing puzzles with his grandchildren. He was preceded in death by his parents; and two children, Buddy Shackelford and Christina Lane.

Memorials may be made to the First Baptist Church and may be left at Morehart Mortuary. Condolences maybe made online at www.morehartmortuary.net.