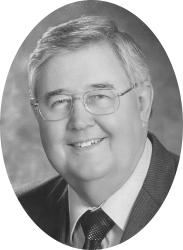 Jimmie was born in Graham (Young County) Texas on July 18, 1940 to James Walter Souter and Bula Belle Johnston Souter.  During his early years, his father served in the US Army Air Corp as a B-24 Liberator pilot in World War II.  He was killed in action in July 1944 when his bomber was shot down over the Ploesti oil fields in Romania. Jimmie was raised by his single mother in Breckenridge, Texas where he participated in church activities and the Boy Scouts. He and his mother were charter members of Bethany Baptist Church. Jimmie graduated from Breckenridge High School in 1958 where he was an honor student and Vice President of the Student Council.  He played football for the Breckenridge Buckaroos under legendary Coach Emory Bellard.

He married Wanda Lue Lewis at First Baptist Church in Breckenridge on May 29, 1960. The couple lived in Waco where they were members of Seventh and James Baptist Church.  He attended Baylor University from 1958 to 1962 where he majored in math with minors in German and Air Science. He was also in the Baylor ROTC. After graduating from Baylor in 1962, Jimmie completed USAF Navigation School at James Connally Air Force Base in Waco.  In 1963 he was assigned to a C124 squadron in Charleston, SC.  The crews flew missions all over the world including trips to Vietnam. While stationed in Charleston, Shari was born and Jimmie and Wanda worked with the Cradle Roll department at Ashley River Baptist Church.  After 5 years and 3,500 hours of flying, he left the Air Force in 1967 and moved to Houston to work for IBM at NASA.  He worked as a manager on the Moon Landing and Space Shuttle programs. While living in Houston, Susan was born and they continued to work with the Cradle Roll department at Sagemont Baptist Church. In 1979, Jimmie transferred to IBM in Austin, TX and the family moved to Round Rock, TX where they are members of First Baptist Church. He held several management positions with IBM Austin which included travel in the US and abroad.  He worked for IBM until he retired.

Jimmie enjoyed playing games, golf, chess, photography, and tennis.  He was also an avid reader and movie watcher.  Jimmie and Wanda enjoyed doing genealogy research.  He also volunteered writing computer programs for The Literacy Council and for the Round Rock Dolphin Swim Team.  He was very involved in supporting both daughters’ slew of activities. Jimmie and Wanda recently celebrated their 60th wedding anniversary on May 29, 2020.

He was preceded in death by his parents and a granddaughter, Melody Ellen Cook.  He is survived by his wife Wanda; daughter Shari Lynn Souter Williams and husband Todd Eric Williams; daughter Susan Lisa Souter Nolan and Jake Cook; and grandson Caleb Walter Nolan.