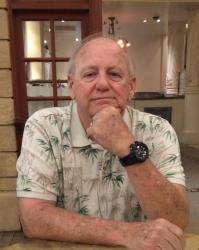 Jimmie Ruel McMillan was born on May 14, 1946 in Breckenridge, to parents, James Forney McMillan and Elizabeth Loughry Stoker McMillan. He graduated from Breckenridge High School in 1964 and later enlisted in the United States Air Force. After his honorable discharge in 1970, Jimmie went to work with his father in the oil field. He soon took over and became an oilfield owner and operator. In later years, he became the manager at Badger Supply, a division of Petex, Ltd. in Breckenridge. Jimmie also owned and operated Breck Airways until June 2020.

On September 29, 1973, Jimmie married Jan Virginia McCathren in Breckenridge. He was an avid aviator and participated in the Reno Air Races from 1982 to 1986. He also enjoyed drag racing at the Big Country Raceway and the Texas Motorplex in Ennis from 1985 to 2018. When home, Jimmie liked to mow the lawn, but most of all he loved to spend time with his family and his grandchildren. He was preceded in death by his parents, Jim and Elizabeth McMillan; and two sisters, Ann Le May, Laura Bevill.

Memorials may be made to the charity of the donor’s choice and may be left at Morehart Mortuary. Condolences may be made online at www.morehartmortuary.net.