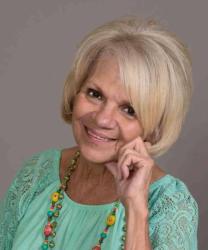 Helen “Joey” Ruth Lozowski was born July 4, 1943 in Biddeford, Maine to parents, Walter Francis Lozowski and Maxine Elizabeth Clegg Lozowski. Soon after graduating high school, she enlisted in the United States Army because her brother Robert could not. From 1962 to 1964, Joey served as a nurse in the Army. While in the service, she was second runner up in the Miss Armed Forces Pageant. After her honorable discharge, she made her home in Breckenridge and was loved by many. Helen married Billy Joe Horton in 1980. While in Breckenridge, she was a member of Abundant Life Church where she loved to worship her God and Savior. Joey enjoyed decorating the church for dinners and holidays. She loved going to bible studies and knew her Bible cover to cover. No matter what anyone needed prayer for, she knew where to find it. Joey was also active at Senior Focus in Graham. In her later years, she moved to Denton to live with her daughter. She loved spending time outside, going for walks and even just sitting and visiting with neighbors and friends. She never met a stranger. More than anything, she loved her children, grandchildren and great grandchildren, who lovingly referred to her as Nan. She was preceded in death by her parents; one brother, Robert Francis Lozowski; her son-in-law, Mike Richardson; and daughter-in-law, Renee Kan.

Memorials may be made to the Alzheimer’s Association and may be left at Morehart Mortuary. Condolences may be made online at www.morehartmortuary.net.