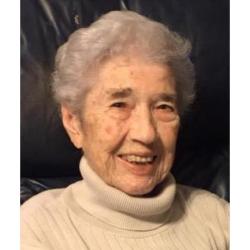 Margie Nell Squyres Stuteville, 98, passed away Saturday, Oct. 30, in Olney. Memorial services will be at 11 a.m. Thursday, Nov. 4, at First United Methodist Church in Olney, with Reverend Harrell Braddock, Jr. officiating. A private family burial will be held at Restland Cemetery in Olney. Arrangements are under the direction of Lunn Funeral Home of Olney.

Margie was born Jan. 3, 1923 in Breckenridge, to the late Claude Albert Squyres and Tony (Hudzietz) Squyres. She graduated from Breckenridge High School in 1941. She passed the Civil Service test and went to work for the Midland Air Force Base until 1945. She married Clyde Dois Stuteville on May 19, 1945 in Santa Barbara, Calif. and they moved to Olney in 1946. She was the office clerk for Texas-New Mexico Power for sixteen years. She and Clyde became co-owners of Olney Feed and Elevator with farming and ranching on the side. Later on, they became the co-owners of Ton-Ville Grain, Inc. Margie was a member of the First United Methodist Church in Olney. She was preceded in death by her parents; her husband, Clyde, on Sept. 14, 2000; three brothers and one sister.

Margie is survived by one son and daughter-in-law, Jack Stuteville and wife Debra, of Olney; two daughters and one son-in-law, Jenny Miles, of Valley Mills, and Jill Davis and husband Rick, of Olney; nine grandchildren, ten great-grandchildren, and numerous nieces and nephews.

A special thanks to the loving caregivers of Mrs. Stuteville over the last few years.

Condolences may be sent to the family at www.lunnfuneralhome.com.