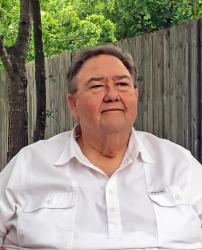 Rondal “Ronnie” Pendleton, 73, of Breckenridge, passed away Thursday, July 22, in Abilene, TX. His memorial service will begin at 11 a.m. Wednesday, July 28, at the First United Methodist Church, with David Fergeson officiating. The family will welcome friends in the church atrium for a visitation from 10-10:45 a.m. immediately before the memorial service.

Ronnie was a servant-leader in his community and always put others before his own interests. Despite sometimes having differing opinions, he was known to be an incredible listener who chose not to pass judgment on any individual. In his capacity as a law enforcement official, he was an impressive patrolman and a tenacious detective and investigator. He eventually rose to the rank of Chief of Police, where he was known more to be an enforcer of “concern for the individual” rather than an enforcer of laws. Because of this unique approach, citizens of the community often found themselves grateful for his caring attitude. After retiring from the police department, he was elected as Constable, a position he held repeatedly through multiple elections. Upon his retirement as Constable, Ronnie completed over 40 years of service as a criminal justice professional. He touched numerous lives, and because of his interactions and interventions, many people who crossed his path went on to become contributing members of society.

“Earl,” a term of endearment often used by his wife, Susan, developed a life-long passion for weapons and was usually considered an expert marksman (even if in his own right). He would razz fellow gun owners, including his two younger brothers. In his later years, when his two granddaughters got their own shotguns, he would jokingly tell them they needed more practice. However, just like their “Pa,” the girls had their own quick-witted responses: they would tell him that if they were to take five minutes between shots, they too could be an expert shot! His response would always be a big grin followed by throwing his head back to laugh -- a memorable action his family loved to watch.

His two sons and their spouses were very close to “Dad,” and they all leaned on him for wise counseling and fatherly guidance. He was always proud of their accomplishments and enjoyed observing his kids’ special relationships. Bantering and good ol’ storytelling were probably the most cherished times his family will remember about Ronnie, Earl, Dad, or Pa. He was the bedrock for his entire family, and he will forever be missed.

Ronnie was preceded in death by his parents, Roy and Mildred Pendleton.

Memorial donations in Ronnie’s name can be made to Meals on Wheels in Breckenridge or the American Diabetes Association and can be left at the Melton-Kitchens Funeral Home office. Condolences can be made at meltonkitchens.com