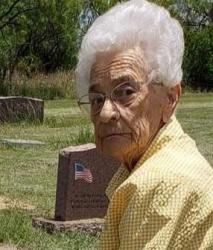 Peggy Juanita Franklin was born Feb. 7, 1932 in Breckenridge, to Albert R. Franklin and Tressie Beatrice Elliott Franklin. She grew up and attended schools in Breckenridge. On May 26, 1951, Peggy married Walter Emery Burrows, Jr. in Breckenridge. The Burrows’ moved to Hugoton, Kan. where Peggy worked for animal control and at a hospital. In 1996, the Burrows’ moved back to Breckenridge where she worked for Stephens Memorial Hospital. She was a member of The Lighthouse Church and enjoyed reading, gardening and doing puzzles. She was preceded in death by her husband, her parents, two brothers and one sister.

Memorials may be made to The Lighthouse Church and may be left at Morehart Mortuary. Condolences may be made online at morehartmortuary.net.