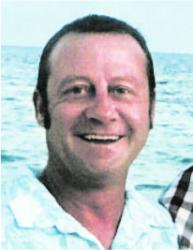 Jay was born to Leon & Jean Curtis in Breckenridge. He was the youngest of six children. He graduated from Breckenridge High School in 1991. While in high school, he was in the Buckaroo Band. His talent on the baritone earned him a scholarship to participate with the Cisco Jr. College marching band. He was honored to travel and march with CJC band in The Lord Mayor of Westminster’s New Years Day spectacular in London, England in 1993. He graduated with an associate degree from CJC in 1993. He then went on to graduate from Texas State University in 1996 with a bachelor’s degree in criminal justice. He was an adult probation officer for Brown County for 16 years.

Jay was an avid fisherman. He was involved in various fishing clubs and tournaments. Above all, he was a dearly beloved father, son, and uncle to his family. “Jaybo” was dearly loved by his nieces and nephews and they looked forward to fishing with him.
Jay loved his children more than anything in the world. He was their baseball and flag football coach and took them to the beach, skiing, and fishing.

He was preceded in death by his father, Leon.